Not a lot new on the conversion, It has been dependable with consistent range. I checked today and 32 AH got me about 44 miles with temperature of 83 F.
I bought a used set of used temperature sensors to replace the set borrowed from my other VX following a failure of one board. I also got a Magic Box in the deal, a canbus add on that gives information on the canbus to the dash display.
I can now read temperatures, amp hours, voltage and current. Much is redundant with cycle analyst, but the restoration of my non working "fuel gauge" is a great plus. I now have the left indicator that shows state of charge at a glance.
I set it to indicate empty at 20% remaining to keep the batteries healthy and a range cushion.
﻿
Posted by Jerry at 7:15 PM 6 comments:

All is well, finally 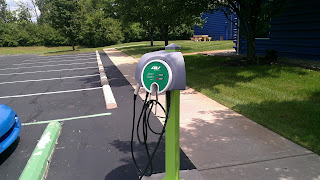 I have been making many trips to various locations and seeking chargers to top off the charge. All has been working very well, my adapter is working great at all locations and has made my trips stress free as I top the charge. Bottom picture is me charging meeting with a friend with a 20 year old conversion, 200k plus EV miles.
Posted by Jerry at 5:56 PM No comments: 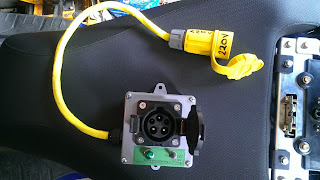 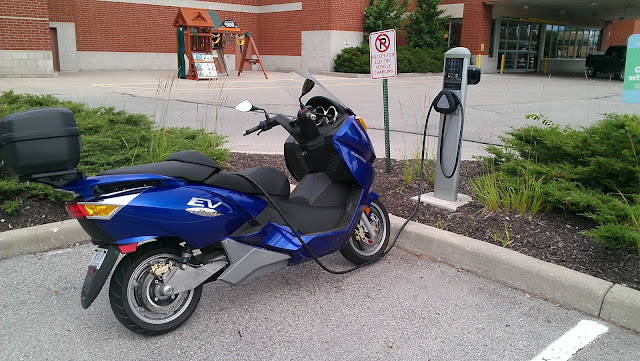 I got a chance to test my adapter today, I took a trip to a shopping center and plugged into a chargepoint charger. I went to the hardware store and in 45 min I was full again, it was only a bit over 8AH discharged but encouraging to see things work. 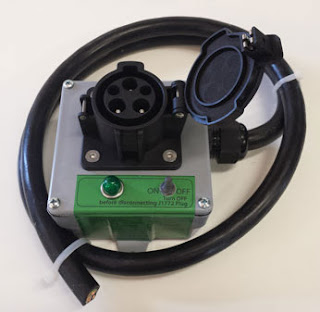 I bit the bullet and ordered an adapter from Tucson EV, it was less than me trying to source the plug and other bits to build my own.
My adapter looked slightly different from the stock picture above, the wires were not in a cable, just 3 wires.
I wrapped the wires in self vulcanizing rubber tape, and installed a water resistant plug that I labeled 220v.
I have yet to give this a test, but am anxious to do it. I found a nearby charger that I can connect to to check things out.
Posted by Jerry at 4:00 PM No comments:

Overheating, The bike and I

Summer is coming in quick and hot, and the bike isn't happy with it.
I returned home from a 35 mile drive and plugged the bike in, high temp and battery lights then service icon followed, great..
The display indicated 36C and the charger will not stay running.
I eventually got the charger to work, letting the bike cool overnight. I took a trip into town and returned to charge and encountered the same issue.
Connection of the canbus service program showed a high reading on one of the temp sensors and erratic operation of the group. I took things apart and of course, it was the one under the second layer of batteries.
I located the harness from the second bike and with some effort swapped out the sensors.
So far the temperatures look good, and the charger is working well. I added a fan to the battery box as well as a precaution. More testing on the warm days to follow to confirm things are all good.
Posted by Jerry at 4:49 PM No comments:

I decided to try messing with the charging on the bike rather than cracking into the battery box and measuring all the cells.
I decided to run an earlier version of the charger software even though is charges slightly lower than what I have been running. Since that was not working I thought not much to lose.
I loaded the software and found an issue in the motor controller software not reporting properly.
I loaded the 68 Mph motorcontroller software and the charger software, the bike now charges to 153 volts.
Since all the software in interactive, I may have found the charge problem.
I can now go 68 miles per hour and got rid of my red battery light.
I did lose the battery bar graph display, but the cycle analyst handles that information.
I will do some test trips and see if all is well.

I had a full charge and a nice day, so I decided to test the range to see how things are working.
I drove with some hard accel, I strapped on some things from the store and a 50lb bag of softener salt.
After dropping that off I drove at 50-55 mph and mixed speeds.
I ended with 108 watt hours a mile, used 33.47 AH, 43.6 miles.

The range seems to have dropped slightly from last year, but very close.
I couldn't charge on arrival at home, high temp and battery lights were on, showed
36C about 97 degrees F. things all good after a brief cooldown.
I wouldlike to get a fan in the battery box, I think it could help.
Posted by Jerry at 3:32 PM No comments: 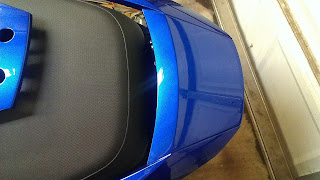 While the Vectrix has a generous amount of storage under the seat, there is never enough room on a motorcycle to carry things.

I was able to find a color matched mount for a top case on Ebay and picked it up for a reasonable price.

I could have drilled holes in the original part and made something work, but I was happy to find the original Vectrix parts. 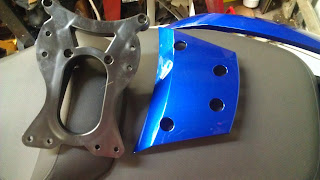 The kit contained the paint matched tail cover and sub mount for a hard case, including brackets, spacers bolts to do the job. 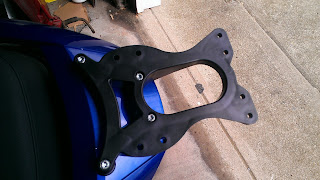 It was a bit confusing at first, the instructions were impossible to read, the picture of the install allowed me to sort out the spacers and brackets.


It fit well and looked very clean when complete, better than I could have fabricated in a reasonable time frame. 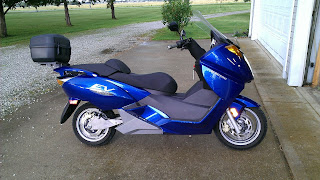 I had purchased a aftermarket hard case from an ebay vendor that is removable with the flip af a key.
Quality seems fair to good, I do like that I can remove and take the box with me or use the mount as a rack to strap an item down.

While not the most stylish, I will find the space useful I am sure.
Posted by Jerry at 3:22 PM No comments: